What Are You Allowing in Your Presence? 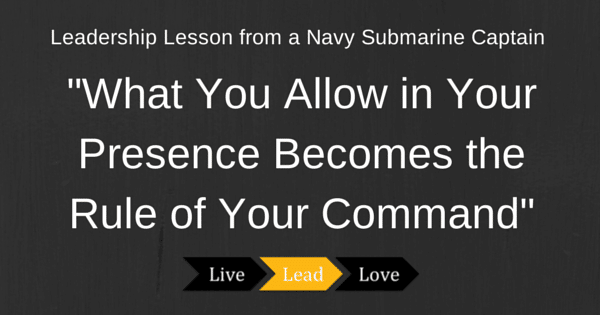 How often have you heard of the importance of embracing the values and “walking the talk” as a leader? It is certainly extremely important. In fact your actions as a leader help the desired culture of the organization or team come alive. It illustrates to people what you are looking for from a values and behaviors perspective.

However, it is more complicated than just modeling the values as a leader. A while back, I had a veteran of the Navy share with me something he learned from his Captain on a submarine during a tour in the Pacific Ocean. He said it was one of the most important leadership lessons that he learned while in the Navy.

Wow, did that ever hit home with me. I thought back to a situation early in my leadership career. At 26 years old, I was transferred and promoted to Plant Manager of a printing company in Milwaukee, WI. My leadership team was a group of seasoned veterans in the industry. I remember after arriving on the scene and conducting my first few leadership team meetings, that I was struck by the amount of swearing that seemed to be commonplace, and well accepted as part of the culture.

This was not the culture that I wanted to lead. I thought that I would just model the way by never swearing. I figured the team would detect that I didn’t talk like that, so it wasn’t acceptable for others to talk that way either. Guest what. It never changed. People went right on conducting themselves the way they did prior to my arrival.

As this example clearly illustrates, it is not enough to just model the way, it is just as important to clearly and immediately address any issues that are against the values of the organization. As a leader, allowing poor behaviors to go unaddressed, communicates to other members of the team that this behavior is OK.

Servant leaders are clear about what they expect.

Servant leaders provide constructive criticism when necessary. They coach their team members on areas of performance and behaviors that need improvement. That takes courage at times. Courage, that in retrospect, I did not have as a 26 year old Plant Manager.

There is no better way to advance your desired culture than to make heroes out of people who are living and modeling the values, and to effectively coach and deal with those that are not. Is there anything you are currently allowing in your presence that should be addressed?

“‘Do not hate a fellow Israelite in your heart. Rebuke your neighbor frankly so you will not share in their guilt. “‘Do not seek revenge or bear a grudge against anyone among your people, but love your neighbor as yourself.”  Leviticus 19:17-18