The Baton Exchange Stresses the Importance of Teamwork 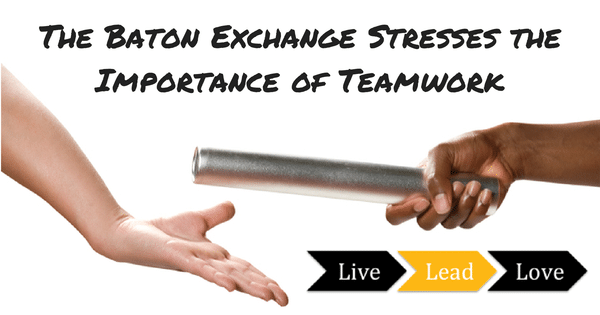 You can have all the talent in the world, but it might not equate to success. Teamwork is the key!

I have good friends whose daughter’s relay team won the MN High School State Championship in the 4×100 Relay this weekend. When they asked for prayers for their team, they did not ask people to pray for them to run the fastest, they asked for coverage on the baton exchanges.

Without a focus on teamwork and smooth handoff’s from one team member to the other, these four girls could have been the fastest individually in the state (which they weren’t), and not won the race.  Instead they are state champions, due to their intentional work on being a great TEAM!

Their ultimate success depended on a significant amount of practice and coordination on passing the work that needed to be done from one to the other.

Servant leaders understand the importance of teamwork. They recognize that all of us are always smarter than any one of us. They capitalize on each individual’s strengths and then maximize the efficiency of the coordination and transitions between them.

In my experience, these key attributes of a high performing team do not just fall into place over time. Instead it takes intentional work together, clarifying all of the key aspects listed above, and practicing being a great team.

Great teams also continually ask themselves how they are doing, and where they could improve their effectiveness. They know they can always be better, and are vulnerable enough to admit their shortcomings and work on them.

Your team can build state championship caliber performance as well, by being intentional about insuring that these key aspects of high performance are in place.

Bonus: This works in families as well. If you would like help developing your Family Portrait (which includes all of the aforementioned keys of a high performance team) you can attend a Family Portrait Retreat on June 23-26 at Mt. Carmel in Alexandria, MN.