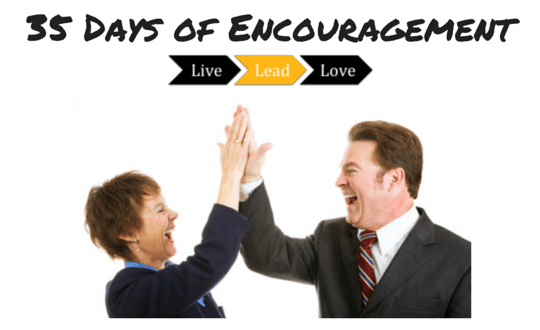 There has been a lot written and said about the “Deflator” recently. The “Deflator” is the nickname of one of the equipment managers of the New England Patriots. Tom Brady supposedly worked with him to have footballs deflated to a PSI that he was comfortable with to effectively throw passes that his receivers could catch.

This situation has not worked out real well for Brady or the Patriots at this point. Being a deflator as a leader is not good either!

We all have numerous interactions with people everyday. “Deflators” focus on the negative and things that have gone wrong. They always want to fix people. “Encouragers” focus on the positive and look for ways to build people’s self esteem. They build energy.

One of the very best ways I know to build energy is to recognize and encourage people for the great work they are doing. Look for things that are going well both from a performance standpoint as well as a values and behaviors standpoint, and let people know how much you appreciate their efforts that led to the positive actions that you observed.

I find this so important that I developed a 35 Days of Encouragement Challenge. Everyone who is currently participating in a Year 1 – 2015 Leadership Roundtable Group has accepted the challenge and will be starting it on Monday May 18. I would like to invite you to join us in that challenge.

This is the second year we have done this, and the results last year were remarkable. After 35 days of intention around being an encourager, people reported that it became a part of their DNA. They noticed that it was impossible to out-encourage people, that the more they encouraged the more encouragement they received.

If you would like to join the challenge you can go to Triune Leadership Services Facebook Page and get the daily challenge starting on the 18th. I would love to have you weigh in on your experiences over the next month on Facebook. It will benefit everyone!

The first two days of the challenge were:

Enjoy the challenge, as you become a better encourager and Build Energy!

Therefore encourage one another and build each other up, just as in fact you are doing.