Look for the Positive Way Forward 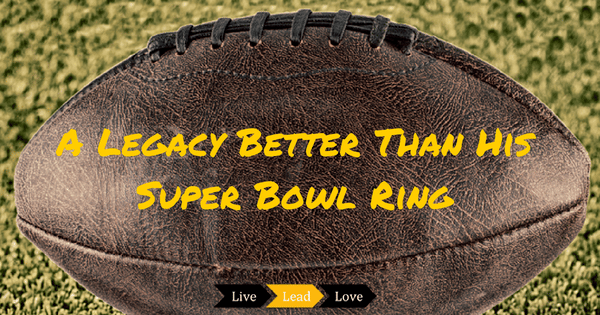 Every so often you meet someone who leaves a lasting impression. I had that experience on Friday when I introduced Ben Utecht, our Alexandria Unity Foundation Luncheon speaker.

Ben, who is married and has three beautiful young girls, played football for the University of MN. He then played for the Indianapolis Colts, winning the Super Bowl in 2006. A couple of seasons later, he was playing for the Cincinnati Bengals and suffered his 5th concussion, which caused him to retire from football at 29 years old. He then pursued a career as a singer / songwriter of Christian Music. He has recorded three albums, one of which (“Christmas Hope”) was nominated for the Holiday Album of the Year by the Dove Awards. His recent hit and music video, “You Will Always Be My Girls” has been viewed by over 600,000 people in the last few months.

Ben is also an advocate and spokesman for the American Brain Foundation and he recently received the 2014 Public Leadership in Neurology Award from the American Academy of Neurology.

That is quite a resume with each stop along the way being impressive in its own right, but that’s not what stuck with me.  What impressed me was Ben’s faith and understanding that all things in life may not go as planned, but you should never lose hope as God always has a plan.

As one of the top tight ends in the nation, Ben was injured his senior year in college which resulted in him not being drafted as expected. That however allowed him to be picked up by Tony Dungy and the Colts in free agency, which led to many great leadership and life lessons, and the opportunity to contribute to a Super Bowl Championship. His concussions caused him to leave football, but he used that opportunity to build a platform as a singer /songwriter and an advocate for awareness and research of traumatic brain injury. In each of these instances Ben could have rolled up his tent and felt sorry for himself. Instead he is leaving a legacy that is far greater than his Super Bowl ring. His efforts will no doubt lead to significantly less people having to suffer similar brain injuries.

Servant leaders deal with adversity the same way. When things don’t go as planned, they look for the positive way forward. They don’t panic, as they build new plans. They recognize that God desires the best for all people and they surrender to God’s plan in their life. They don’t feel sorry for themselves, instead they build new bridges and a better future. And they share their story for the benefit of others.

Never knowing what tomorrow will bring, Ben said “I will take everything I learned about becoming a World Champion, and use that in my passions for music, speaking, and advocacy. I hope that my relevance as a man, is that I was a great husband, father, and I made a difference in people’s lives.”

Do you have faith that God has your best interest in mind no matter the circumstances? Do you surrender to His will and look for the best way forward? That is my prayer for the day.

And we know that in all things God works for the good of those who love him, who have been called according to his purpose. Romans 8:28